Willow’s first trip to the Shops and a Dog Cafe! 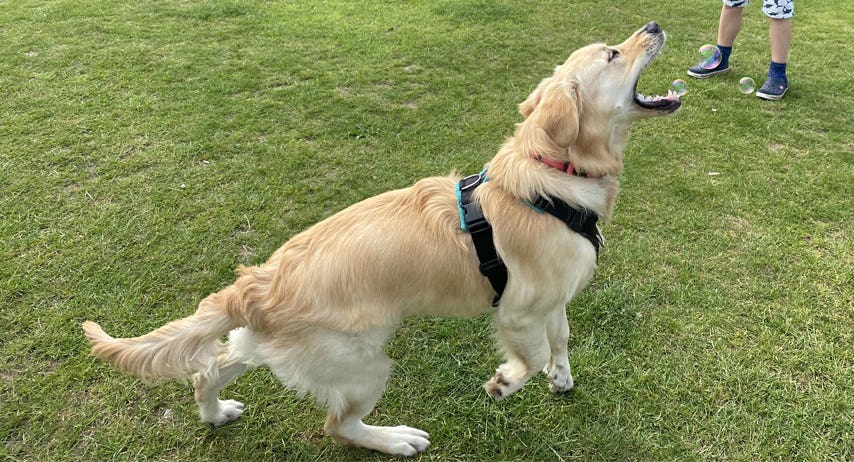 Willow’s first trip to the Shops and a Dog Cafe!

So, with the possibility of the Annual ‘Hot Dog’ competition being postponed this year, we decided we needed to find another event for Willow to attend, to test her willpower and manners...

What better than a trip to the park and an ice cream at the dog cafe!

I’m not going to lie, it takes quite a bit of hand/eye coordination to control a wheelchair, a 7-year old and a teenager who’s glued to her phone and then throw a 7-month retriever into the mix and well you can imagine!

However, Willow (so far) has this amazing ability to switch into gear whenever she’s with Ted in his chair and become laser beam focused. Although, I’ve noticed that is only when it’s with Ted and not the rest of the gang, only a week ago I ended up slipping down and flipping forwards into a muddy ditch, losing my sunglasses in the process when picking up after Willow, losing concentration momentarily whilst I tied the bag and Willow saw her favourite furry friends, the squirrel. So, this was going to be somewhat of a tense moment taking her to the cafe and the shops all in one go.

Well, I shouldn’t have been so worried, Willow was like an angel! She even stopped every couple of steps whilst I navigated the wheelchair around other chairs and tables and sat patiently as I had to reverse, move a few things in order to get through and then she just took the whole environment in her stride.

First up we decided to get an ice cream at the dog cafe. I think she subconsciously knew that Monty wouldn’t finish his, so she sat very patiently, even if he could feel her hot ham tongue hovering over him, she never attempted to lick it until it was her turn. Of course, rather than take one lick, she bit the entire top of the ice cream off and half of the cone, so that was a gonner! Next, I took her and kids into a dog friendly clothes and accessory shop in the high street, so impressive was she, that quite a few of the customers in there commented on how well behaved and patient she was, they were all giving her dog treats and cuddles and making a massive fuss of her. It’s now her favourite place to hang out (other than the park of course) she doesn’t want to leave!

Finally, we have discovered a very simple but very effective game that came about totally randomly the other day whilst on the green, I can highly recommend it to any other dog owners. It’s cheap and easy to administer. Basically, it’s chasing bubbles and trying to catch them!  What a joy!  We have spent literally hours laughing at Willow whilst blowing simple bubbles and watching her leap about like a salmon trying to catch them. Honestly, it’s better than any TV and it was the best fun we’ve had all week!