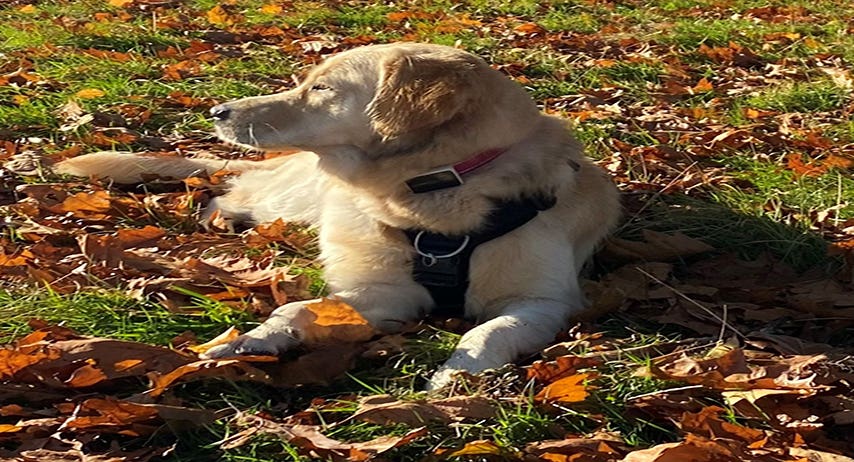 Its been a busy time for Willow... read the next installment by Abigail Hutton-Tufano

So much has happened this last month and some very big moments for Willow!

It all started with Halloween and Willow’s unappreciation for our carved out pumpkin sitting on our wall. We hadn’t anticipated how our ‘spooky’ face with a candle in it would literally freak Willow out. So we had to bring it back in the house, take out the candle, let Willow sniff it and then take it out again. We then went up and down our road so that she could sniff all the pumpkins that had been put out and understand they weren’t real! Then for the ‘trick or treaters’ and I genuinely thought Willow would be afraid of them dressed up at our door but not so, in fact it was all the knocking and getting up and down every 5 seconds that wore Willow out and she ended up just passing out in the hallway in front of the door with all the excitement!

Then, we discovered Willow has taken a bit of a dislike to motorbike helmets, this was found out when the poor deliveroo guy came to drop us off a takeaway the next night. I’ve never heard her growl like that and bark so loudly, she was being so protective of us and warning him off but as soon as he removed his helmet she stopped. We figured it was because she couldn’t see his face and work him out. She’s been the same with any delivery driver since, so we may have to get the expert Kirsten Dillon back to come and help us on that one soon, as well as helping to start her training as an assistance dog.

I was fully expecting the lead up to Bonfire night to be frankly a nightmare. Normally, around where we live, the fireworks start a good week before with all the displays, plus throw the neighbours get togethers into the mix and it’s almost a two week event. Willow was surprisingly calm, she even went out into the garden a couple of times to listen and look and generally just figure out where it was coming from. I firmly believe this is because Willow’s breeder played a cd to them as puppies of all different noises from sirens, to fireworks to sudden bangs etc that she really wasn’t fazed. Having said that she did go out for a wee in the early hours a few times for a couple of nights and I think she was just looking for reassurance when it was quiet but she was fine once we gave her a stroke and settled her down again. A few neighbours with dogs said that their dogs were really unsettled through the night but also had been barking non stop, so Willow was amazing all things considered.

Now for the most important event of the year...Willow’s Birthday! She finally turned 1! I can’t quite believe where the time has gone and the fact that at the end of January we would have had her with us a year too is amazing! So we pulled out the big guns, toys, a dog friendly cake, candle (which we blew out and kept at a safe distance of course), sang happy birthday and made a massive fuss of her. It all finished off with Willow destroying her caterpillar toy and getting into the bath with Ted (she hates baths) and three of us trying to get her out!

Next week Willow is going into be spayed…..we will keep you posted on her op and recovery!