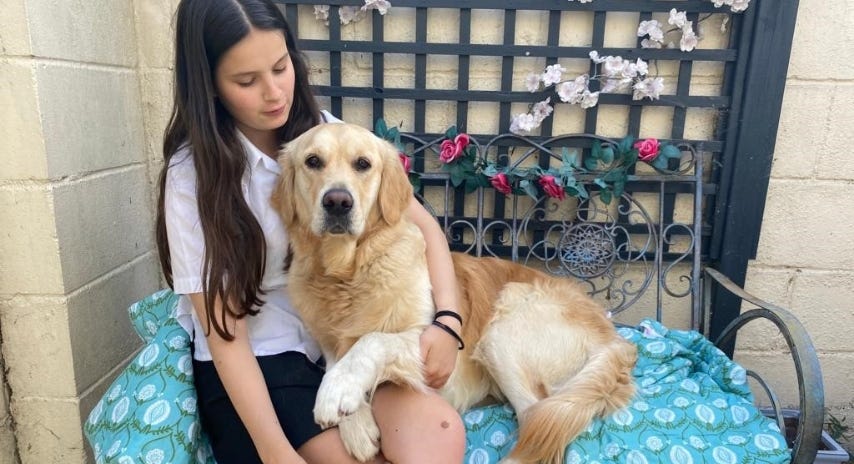 It is true that owning a dog is like having a child, in which case, Willow is my fourth and, at times, most unpredictable child.

There are days when she is so impeccably behaved and does everything she's told, she's a total dream, and I start imagining how lovely it would be to have another puppy and what a great addition she would be to the family. Then I have those days where she's on one, thrown all her toys out of the (doggy) pram, and I immediately park the idea of having any more.

So, it was exactly one of those weeks that started as a dream and ended up with me wondering what on earth I was doing.

Richmond Park had just introduced their annual Summer order that 'dogs must be on a lead' to protect the baby deer, which ultimately results in all local dog walkers finding new places to roam with our pups. I had heard ham lands by Ham House was a lovely place for dogs. There is the river on the walk down, which Willow loves, and then the meadows and forests for her to explore. All had been going so well; she loved going for her swim and then running in and out the long grass, exploring the ponies in their field and generally having a great time until she decided to swim along with the ducks downstream for 10 minutes.

I had visions of being on the local news 'Dog Owner's dog Willow ends up swimming to Windsor' being the headlines. No amount of calling, whistleblowing and treat shaking was making any difference. She was having a ball! I ended up half jogging whilst trying to keep my composure with other walkers and act like this was normal along the bank to keep up with her. Just when I was figuring out how I was going to explain to Rich and the kids how I had lost Willow in the Thames, thankfully, she turned around and came back. I, of course, could barely look at her; I was so mortified!

She knew she was in trouble because she then spent the next 24hrs being a dream dog again. However, I wasn't buying it so quickly – having three kids and a ton of experience in being mind manipulated by them has taught me well.

The next day, our cat Rosie was stalking at the front door, something she doesn't usually do. Suddenly, there was a continual swooping of blue tits, almost trying to scare her off. I've seen this movie before, the last time this happened, she brought a bird in and left it by our suitcase. So I brought her in and went outside. The birds were still swooping, but I just couldn't see anything obvious. I checked in the recycling bins, but still nothing. I thought I would see what Willow made of it all, so she went outside and interestingly, she sniffed all the way to the gate, where the birds had been swooping, then backtracked and ended up sitting next to a recycling bin I had already checked and barked. She barked again, so I took out all the contents and there it was a tiny baby blue tit. It must have fallen out of its nest, and Rosie had picked it up, and the bird had somehow hidden itself in some cardboard. I was so proud of Willow! I let her look at the bird, and then we placed it back in the tree, and just like that, Willow had turned from zero to hero in less than 24hrs!

The next few weeks will be busy for us as we're moving house to a much needed bigger space that we can adapt for Ted.