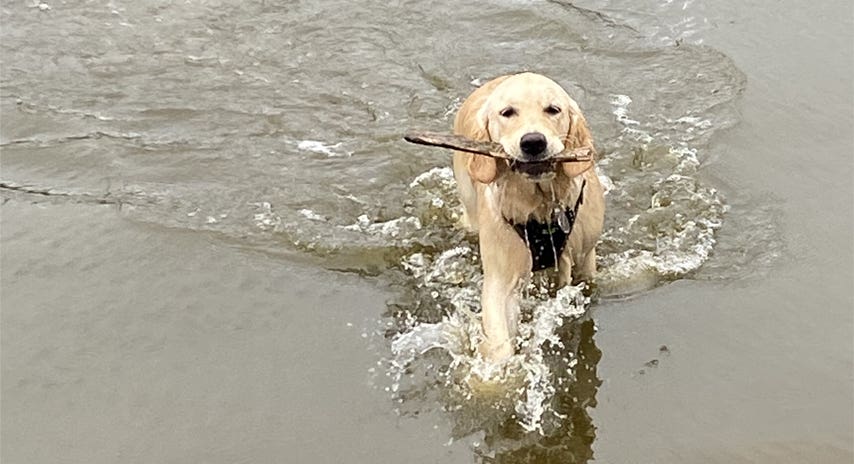 It’s a big month for us in the Tufano household, as we are celebrating National Pet Month!  Our goal has been getting our rescue cat Rosie, who has just turned 10 (on 1st April!) to make friends with Willow….no easy feat!

Willow is desperate to be buddies, tail wagging, sitting nicely and even lying down to show her appreciation of this feline friend, however, Rosie has different ideas and is walking/stalking about the place like she’s the queen, teasing Willow by always being just a bit out of reach for a sniff but then seriously flaunting her stealth skills when Willow is asleep and going right up to her.  Still, Rosie has definitely warmed up to Willow and they can now be happily in the same room together and admire each other from afar!

We discovered that Willow loves the pond, the muddier the better and her favourite game is for us to throw a stick as far as we can and she will swim right past it as far as she can and then pick up 6 others on route back whilst showing off her new doggy paddle skills.  We’ve started going every afternoon into the park where she meets a gang of puppy pals and they all have a play in the water and then a serious roll about in the dirt bank afterwards to dry off!  It’s definitely her happy place and it’s really fun for all of us too, as we get to see her in her absolute element having fun and feeling free. 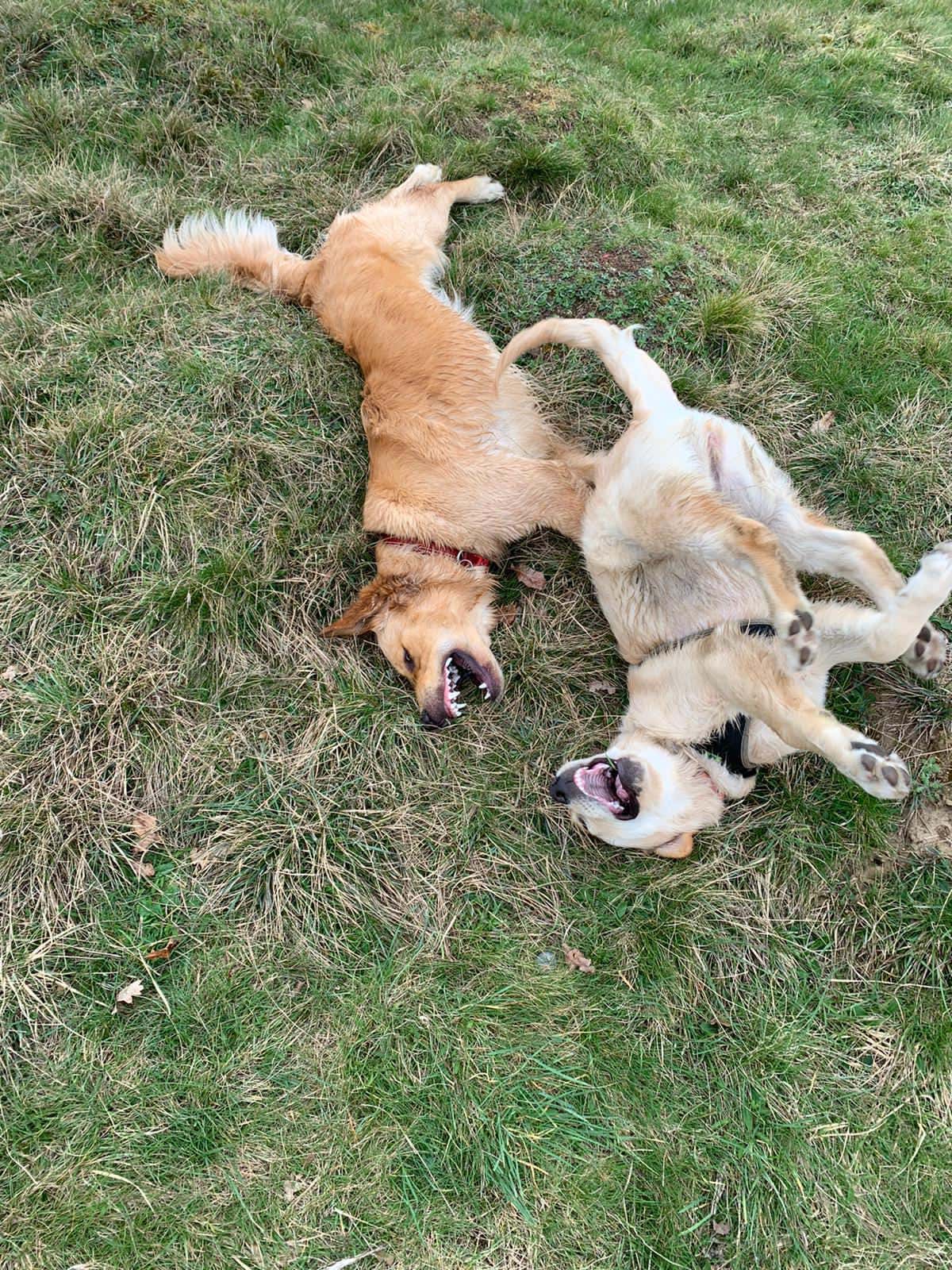 Willow is still loving her puppy food but we’ve also started giving her chicken hearts and duck necks as a special treat late afternoon.  She loves it straight from the freezer, as she’s lost some of her baby teeth and so the cold chew on her gums must be really soothing, plus she has to work really hard to get the meat off which makes it even more exciting for her.  She sits by the freezer when we’re back from our pond exhibition as she knows, if she’s been good, there are some Natural instinct goodies in there for her to have.

I have to say, getting Willow has been one of the best decisions we’ve ever made as a family.  It’s made going out together so much more fun and purposeful and has really helped with all of us in different ways.  Monty, Ted’s twin, was always terrified of dogs after been flattened by one along the river when he was a toddler, it’s taken him a good couple of months with Willow but he’s a totally different child now.  He lacked confidence due to a motor tic that he was self-conscious of but with Willow he’s so focused on her, his tic seems to be much less obvious and a bonus is that we’ve bumped into lots of his school friends who have fallen in love with Willow, that it’s given him the confidence to play with them, as he was too shy to ask beforehand.

Finally, Bea who at 13, has definitely been worst affected by lockdown.  Willow has given her the freedom and desire to go out and meet her friends who also have dogs, for a walk in the park and given her and them a distraction and common ground from all the stress and anxiety of homeschooling and then returning to school.  As a result, Willow has become best buddies with cockapoo puppy Bailey and fellow retriever Lola, who at 1 is the ‘mum’ of the group, and loves her weekly puppy playdate session as much as the girls do and we’ve started uploading photos of them and their puppy antics at #LoveForPets to share in our appreciation of our furry friends. 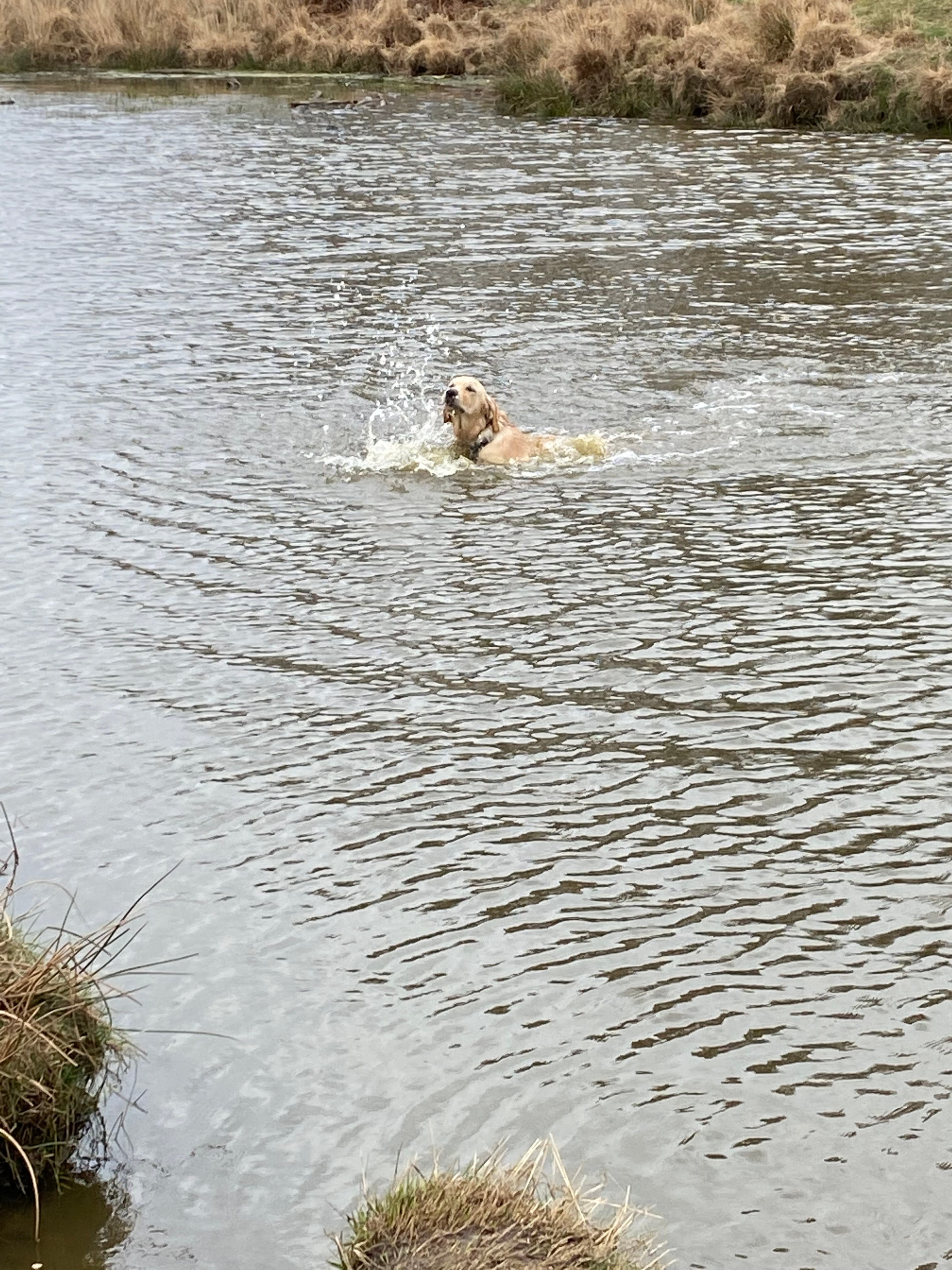